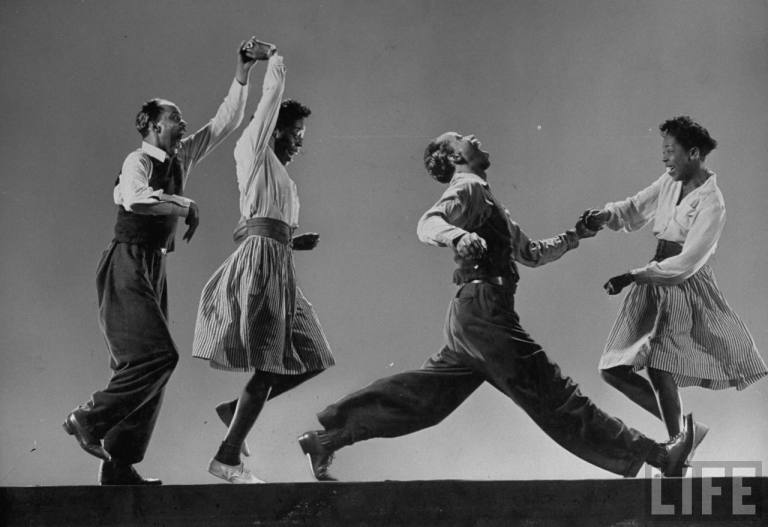 A brief history of swing and lindy hop

Swing is a type of jazz music that was developed from the 1920’s onwards. Swing is rhythm, spontaneity and freedom. More than a particular JAZZ style is a way of touching it that arose among African American communities in the United States. It is characterized by a syncopated rhythm, giving great importance to the rhythmic section of the band and the use of improvisation.

Lindy Hop is one of the dances that allows you to dance Swing music. Originally from HARLEM, in 1927, the legendary Ballroom SAVOY is considered the cradle of Lindy Hop. It quickly spread throughout the USA, and later to other countries. The August 23, 1943, LIFE Magazine declared it the national dance of USA. After WWII, it evolved into different, more fashionable dances and swing styles, which eclipsed it, till it was virtually disappeared … Until the 1980’s, some people decided to recover it-and now a days it danced around the world.

Lindy Hop is a couple dances. In Swing Dances, there are two roles: one who guides, the Leader, and the other that follows, the Follower. It is one of the few couples dances that offers both the leader and the follower freedom to style and improvise their own movements.

What is amazing about this dance is that when dancing, not only the rhythm but also the melody is followed, the Swing’s own phrasing is respected with its cuts, giving rise to a lot of creativity and variation.

The social nature of Lindy Hop is based in danced with different people, not with a fixed partner, with acquaintances and strangers, this causes us to socialize with other people, to chat and interact.

Worldwide, Lindy Hop schools and groups have emerged in recent years, attracting people of all ages. People who dicover it on street dancing, lounges and bars. Whoever tries it and can’t stop! Music, figures, good vibes and even their aesthetics are the ingredients of this dance that are becoming more and more popular. Look at people when Lindy Hop is dancing in the street. There ara smilling all the time! It is perhaps, the reason that makes year by year increasing exponentially the number of people dancing it. Every weekend, a lindy hop festival is held somewhere in the world.